After skiing the Slot and Crooked couloirs on Saturday, Josiah was done with skiing for the weekend. With Matthew in Bishop for Spring break and Nate in Utah, I was all out of ski partners. Fortunately, Emma was heading out to Leavenworth to go bouldering and I convinced her to drop me off at the end of Icicle Creek so I could ski for the day. We left Seattle at 7:45am, a bit late but I appreciated the extra sleep after waking up at 4am to beat the sun on Saturday.


We made it to the Bridge Creek Campground and I set off up Eightmile Road at 10:30am telling Emma that I would be back by 7pm but not to worry until 8pm. The road was covered with a thin layer of snow with a few short uncovered patches. I didn't bother to take my skis off.

I had thought about skiing the Cannon Mountain Couloir but decided against doing it solo. The river crossing looked manageable but the trees on the lower part of the approach looked like a steep, post-holing nightmare.

I made it to the Eightmile TH after about an hour and took a break to eat some food. A guy and his dog ran up. He said that he was just taking the dog for a walk on his "rest day." We chatted for a bit before he took off up the Eightmile trail.

I continued up towards the Colchuck Lake TH and ran into a couple climbers who had attempted Triple Couloirs on Dragontail. They spent Saturday night at the lake and tried the route this morning but turned around at the base due to cold feet, both literally and figuratively.

I started up the Colchuck Lake trail at noon and found it to be in amazing condition with no rocks to speak of. Worlds better than when I skied it last December. I skinned quickly with the assistance of music and plenty of caffeine. I passed a few parties on the way up but by the time I made it to Colchuck Lake I was alone.


By now it was 2pm and I had been moving for 3.5 hours. I had expected it to take much longer and I was psyched to have the extra time. I started off across the lake towards the Colchuck Glacier. There was a beautiful skin track leading the way which made for a quick ascent.


I began to tire once on the glacier but but kept up the pace to give myself plenty of time for the descent.


Once on top I took a second to admire the view and appreciate my position, completely alone in one of the most beautiful places in the Cascades. I transitioned and readied myself for the descent. I knew it wouldn't be difficult, but being alone makes everything feel a bit more serious.


The 2500ft descent to Colchuck Lake was incredible with consistent shallow powder the whole way down and no crust. I skied a conservative line sticking close to the base of Dragontail where other skiers had gone before. Steeper untracked lines tempted me but I knew that now was not the time to push my luck.

Once down at the lake I started skating across but had to take frequent breaks to rest my legs and triceps. I admire the cross-country skiers who make skate-skiing look effortless. It certainly isn't.


The descent from Colchuck Lake had some really enjoyable skiing through tight trees. Lower down the trail turned into a bit of a luge track but the snow was still soft and forgiving from the heat of the day. A couple hours later and it would have been a different story.

At the road I felt a sense of relief, knowing that barring a major screw-up I would make it out fine and on-time. I let the road do the work and enjoyed the view.


The road had melted out a surprising amount during the day and there were now patches of up to 100ft of bare road. I gingerly side stepped down the road, too lazy to take my skis off.

I made it back to the car at 5:30pm for a car-to-car time of 7 hours. I found Emma's car in the parking lot and assumed that she was bouldering nearby. I checked Machine Gun, The Sword, and The Egg but couldn't find her. I talked to a couple guys who were working on Resurrection Low and another group cleaning off The Prism. I guess climbing season has started but I'm definitely not ready to give up the skis yet.

I headed back to the car and waited. I killed the time listening to music, taking pictures, and talking to whoever showed up in the parking lot. I met a group that had just skied the Enchantments in 12 hours. They started at Snow Lake TH and hiked to about 2,800' before finding snow. 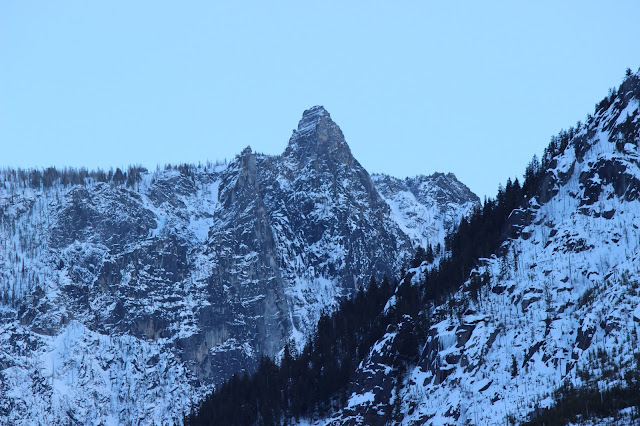 Emma showed up just before 8pm and we headed into Leavenworth for some food. München Haus had just closed so we went to the Bavarian Bar & Bistro instead. I had fried pork cutlets with red cabbage and beer. There was a white guy playing guitar and singing; he played a song in perfect Spanish and it really blew me away.

We headed back to Seattle and made it home just before midnight. An excellent day.